What does the war in Ukraine mean for sustainable development and Business - Interview with Mr. Andrii Kasianov, Chargé d’Affaires of Ukraine in Georgia 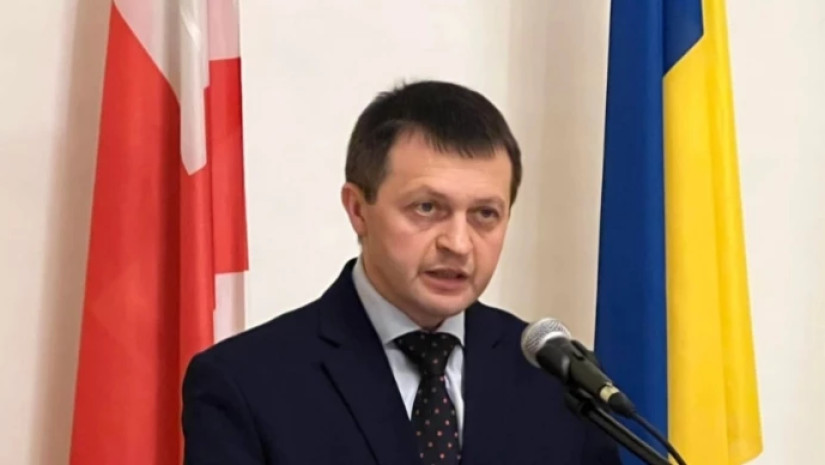 The hostilities launched by Russia in Ukraine on February 24, 2022 have placed the modern world face to face with a new reality. The civilized world was divided into two parts: supporters and opponents of aggression.

Fortunately, the number of the latter has turned out to be small, which was not at all unexpected. People were, in fact, watching the shocking footage of the terrible war live and trying, in word or deed, to support Ukraine. Georgia was among them.

Against the background of the remarkably friendly relations between Georgia and Ukraine, the Georgian people have unconditionally expressed their solidarity and support for Ukraine. From the very first days of the war, the population of Georgia sharply stated their position: solidarity rallies were held, people sang the Ukrainian national anthem and waved Ukrainian flags from their homes. The Georgian public has actively collected humanitarian aid. Andrey Kasyanov, the Chargé d'Affaires of Ukraine in Georgia, talks about how the Ukrainian government perceived all this, what kind of support it expects from Georgia and the international community in the future, and what will be the impact of this war on sustainable development.

The war started by Russia in Ukraine turned out to be a kind of watershed for the civilized world - after the invasion of Georgia in August 2008, the world saw the real face of Russia again. As soon as the hostilities began, Georgia sided with Ukraine: the government, the population and representatives of various sectors began to collect humanitarian aid for victims of the hostilities. What kind of assistance was this and what do you expect from our country in terms of further support?

In the first days of Russia’s full-scale war against Ukraine, Georgia began collecting and sending humanitarian aid to Ukraine. By Georgia, I mean the government of the country, the business community, Ukrainian activists and volunteers living in Georgia, and, of course, ordinary Georgian citizens.

The Georgian government was one of the first to send to Ukraine an aircraft with 80 tonnes of essential medicines, medical devices and equipment, blood for transfusion, essential goods, including for children. As of today, through a volunteer-organized humanitarian hub in Tbilisi alone, one airplane and 36 humanitarian trucks with over 530 tonnes of goods have been sent to Ukraine. In the first, most critical months of the war, hundreds of tonnes of humanitarian aid were sent to Ukraine by Georgian citizens, government and businesses through the Georgian Post. In particular, in terms of the volume of major humanitarian goods received by Ukraine by mail, the Georgian Post is in the first place with more than 520 tonnes of cargo (as of the end of April).

We should not forget about financial support - more than $2.5 million was transferred to the special account opened by the Embassy of Ukraine in Georgia for financial assistance to Ukraine. Funds from TBC Bank, Bank of Georgia, Red Cross Georgia and other organizations were transferred to various government accounts.

The humanitarian situation in Ukraine remains extremely difficult. The enemy continues to destroy critical infrastructure, material and technical base, including warehouses with food and fuel throughout Ukraine. Given the continuation of the active phase of hostilities in the southeast of the country, Ukraine is in dire need of medicine and food. We will be grateful for any help during this difficult period.

What does the war in Ukraine mean for sustainable development and for our collective future?

As we see now, any achievement of sustainable development can be easily destroyed by the desire of one big state to impose its will onto another sovereign state, through genocide and its total destruction. This permanent member of the UN Security Council made everyone forget about quality education, gender equality, clean energy, innovations, climate changes, peace and justice. For more and more people, the desire to survive, save their children and provide themselves with food and basic necessities comes first. And we have seen such dramatic changes in just three months of war in Ukraine.

At the same time, the war in Ukraine could be a decisive impetus for tectonic shifts in the global political, humanitarian and security paradigm and the redistribution of global economic markets, logistics corridors and reintegration processes. Sanctioning russia and excluding it from the raw material and production chains could allow a number of countries to move to a higher technological level in the next decade, focused on developing a green economy, increasing high-technology production and diversifying international trade relations. Reducing the influence of the "Russian model of relations", which restrained, and sometimes completely destroyed, the economic and human potential of other states and peoples, may give them a historic chance for more intensive development, which they have not had since the collapse of the Soviet Union. And it's not just about post-Soviet countries.

As for Ukraine, the main priority is to survive and win on the battlefield of the invaders, with the support of the whole civilized world. After the undoubtable victory, it will be no less a difficult time to restore and rebuild the country, including on the basis of the so-called Marshall Plan for Ukraine developed by our international partners. Receiving reparations and contributions from the aggressor country, as well as the continued isolation of russia through sanctions mechanisms after the end of the war, are also crucial in this sense.

As for the whole world, it will need to adapt to new realities, overcome the global economic downturn, the food crisis and the effects of changes in the global logistics system.

What does the war in Ukraine mean for business and what are the implications of the war for business leaders and the risks they should consider? How should corporations respond to Russia’s invasion?

First of all, we need to realize that the war against Ukraine is unprovoked, absolutely barbaric and without any limits for the brutality of the russian army. There are no war crimes or crimes against humanity that the russians did not commit during the attack on Ukraine. In addition to an adequate military response to russia's armed aggression, it is important to completely isolate this country from the civilized world through unconditional adherence to the sanction’s regime imposed by the United States, the EU, Great Britain and other democracies against the aggressor state. It is important that businesses share the responsibility for complying with the sanction’s regime, not trying to circumvent existing restrictions for financial benefits. Even if some governments are unwilling to make such sacrifices under the guise of caring for their citizens, we expect business to take this proactive stance and principle on the inadmissibility of supporting the bloody russian regime and feeding its economy to further kill of hundred and thousand innocent Ukrainians.

The war in Ukraine is a test for every business. How Georgian companies are responding to the war in Ukraine? How would you evaluate response of Georgian businesses to support Ukraine and the Ukrainian people?

The support that Ukraine and the Ukrainian people have received from Georgia, the Georgian people and businesses is truly unprecedented. And it's not just about providing humanitarian support. Quite a large number of Ukrainians who were forced to flee the war and found themselves in Georgia received significant assistance in providing accommodation, medical services, food, employment and even educational services for their children (with the assistance of the Georgian government and local authorities there were two educational sectors opened in Tbilisi and Batumi, as well as Ukrainian kids have the opportunity to attend kindergartens). Today, there are more than 22.5 thousand Ukrainian citizens in Georgia, who still continue to arrive. And they continue to receive all possible assistance, including from Georgian business. We are waiting now for the next legislative decision of the Georgian Government for the legal settlement of the issue of providing further assistance to Ukrainian citizens residing in the territory of Georgia.

However, the best response for Georgian business to Russia’s war against Ukraine would be to restrict trade with the most toxic country and find new markets for Georgian commodities. This would increase the isolation of the russian economy and would totally benefit Georgian companies and Georgia as well – namely, eliminating Georgia's economic dependence on Russia.

The most pressing question is how we can assist Ukraine during the war either from a humanitarian or human rights perspective. Please tell us more about what needs to be done now? How businesses can help in the short and medium-term?

Since the start of war, a major part of economic activity has stalled: nearly 50% of Ukraine’s enterprises work only partially, and 9% have stopped their activity. The Russian troops damaged and destroyed bridges and roads. Many industrial plants located primarily in eastern Ukraine suspended their work. Russia continues blocking Ukrainian ports in the Black Sea and the Sea of Azov through which Ukraine exported more than 70% of all cargo before the war: due to this, Ukraine daily loses 170 mln USD. In 2022, according to the most recent estimates by Prime Minister of Ukraine, the GDP of Ukraine may drop by 30-50%. The EBRD forecast (as of 10 May) is that Ukraine’s GDP would decrease by 30%. Inflation can reach 20%, according to the estimates by the National Bank of Ukraine. The Ukrainian Government estimates that overall infrastructure and economic losses in Ukraine caused by Russia’s war, will exceed 1 trillion USD in the coming years. Monthly budget deficit caused by war is nearly 5 bln USD.

Definitely this war launched by president of Russia, must be stopped.

The Ukrainian armed forces are doing their best to military defeat the occupants and to end this war of aggression as soon as possible.

For its part Ukrainian business and industry outside the war zone continue working to support Ukraine’s economy. With support of the Ukrainian authorities, the relocation from the war zone continues: 400 companies have completed it, of which 219 have resumed operations in new locations, and 520 enterprises more are in the process of relocation (as of 22 April). The Ukrainian Parliament continues to adopt the laws aimed at supporting Ukrainian business in war time, including by cutting red tape, simplifying tax system, lifting import duties, insuring bank deposits etc.

Another key precondition for ending the war is the total isolation of Russia, its economy, from external resources. Therefore, compliance with the sanctions imposed by Western partners and preventing their circumvention is extremely important. This is the help we need from the international business community:

- international business should leave Russia and the payment of taxes to Russia’s treasury must be stopped (the largest foreign companies paid 20.2 billion USD in taxes to the russian government in 2020, nearly one-third of Russia’s annual military budget);

- not buying Russian commodities, which continue to finance Kremlin’s war against Ukraine should be stopped (most notably on oil, gas, gold and minerals)

- refraining from making payments in Russian roubles for Russian commodities

- restricting Russia from the use of crypto-currencies to circumvent sanctions

In general, Russia should not have any opportunity to circumvent sanctions by using the foreign businesses and territory of other states.

After our common victory and the end of the war, Ukraine will need help in the post-war reconstruction of its cities and destroyed infrastructure. On April 21, President Zelensky signed a decree establishing the National Council for the Reconstruction of Ukraine after the War.