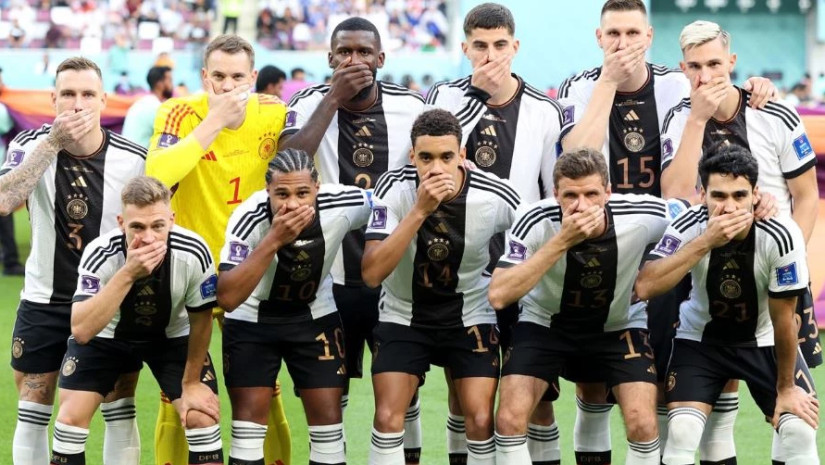 It was a moment so brief that the thousands of fans inside the Khalifa International Stadium on Wednesday could easily have missed it.

But a moment, the time it took for the photographers amassed in front of Germany’s World Cup team to snap a picture, was all it needed for the four-time winners to send a message to soccer’s world governing body.

Germany’s starting 11 all posed with their right hands in front of their mouths, and within minutes, the image was circulating widely on social media.

And as Germany kicked off their World Cup campaign against Japan in Group E, the team’s social media feed confirmed that the gesture was designed as a protest to FIFA’s decision to ban the “OneLove” armband that many European captains had been hoping to wear in Qatar.

It was a game that produced another World Cup shock as Japan came from behind to win 2-1.

Before the tournament, captains from England, Wales, Belgium, the Netherlands, Switzerland, Germany and Denmark had planned to wear the armbands at the World Cup – – which features a striped heart in different colors to represent all heritages, backgrounds, genders and sexual identities – before FIFA made it clear on Monday players would be yellow carded.

On Wednesday, the German Football Federation (DFB) released a series of tweets shortly after the game had kicked off indicating that FIFA had prevented them from using their voices to speak up at the World Cup for issues they felt passionate about, hence the protest.

“We wanted to use our captain’s armband to take a stand for values that we hold in the Germany national team: diversity and mutual respect,” the DFB said. “Together with other nations, we wanted our voice to be heard.

“It wasn’t about making a political statement – human rights are non-negotiable. That should be taken for granted, but it still isn’t the case. That’s why this message is so important to us.

“Denying us the armband is the same as denying us a voice,’ added the DFB. “We stand by our position.”

Prior to countries announcing their captains would not wear the armband in Qatar, FIFA had brought forward its own “No Discrimination” campaign and said all 32 captains would have the opportunity to wear an armband linked to the campaign.