US election results: Where do midterm elections leave Biden? 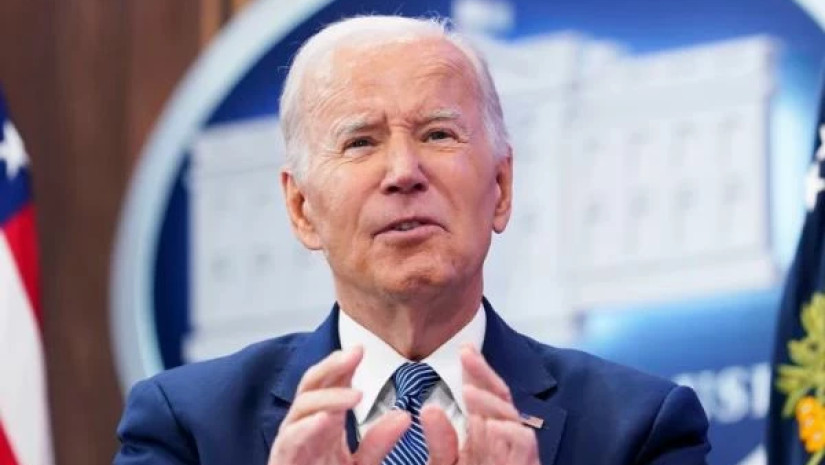 A day after midterm Election Day with no definitive answer about which party will control Congress, President Joe Biden hailed a "good night" but he has immense challenges ahead.

Republicans appear to have won or are leading in enough races to give them a narrow majority in the House of Representatives, but Senate control could come down to a December run-off election in Georgia.
Even if Republicans just take the House, and even if they do so by the slimmest of margins, the power dynamic in the nation's capital is poised to shift after two years of unified Democratic control in Washington.
Here are four very real implications for American politics for the next two years.

Biden's perilous path ahead
In a press conference the day after the midterms, Mr Biden claimed moral, if not always actual, victories. He said Democrats had a "good night" - in part because predictions of a Republican wave that would carry them to a large majority in the House and a multi-seat advantage in the Senate failed to materialise.
Even so, Republican control of either chamber of Congress will present political challenges that Mr Biden has been able to avoid for his first two years in office. Can he keep his composure when facing a spate of congressional investigations? How will he handle budget showdowns that lead to government shutdowns? Will he be able to achieve any kind of legislative agreements that he can campaign on if he stands for re-election in two years?

Most presidents suffer through electoral setbacks halfway through their first term in office. Some have faced even more significant losses than Biden's and bounced back to win another four years in office.
The president told reporters at his post-election press conference that he still intends to seek re-election and may announce his formal decision early next year. How he handles the challenges in the months ahead could go a long way toward determining what kind of odds he would face in one final campaign after 50 years in public office.
The end of Joe Biden's legislative agenda
In their two years in office, Joe Biden and the Democrats were able to enact a fairly substantive agenda, which included massive spending on the environment, healthcare and other social programmes.
That would all end with even the narrowest of Republican victories.
IMAGE SOURCE,JOHN MOORE
Image caption,Immigrants seeking asylum in the US wait to be processed by border agents in Arizona
There's the chance of some co-operation - for instance, Republicans and Democrats did join together to pass gun control and technology investment this year and infrastructure spending last year. However, big-ticket liberal priorities on abortion, education and voting rights will be dead in the water.
Republicans have their own agenda, focused on border security, law enforcement spending, budget cuts and fossil fuel extraction. But even if the Republicans take both chambers of Congress, Democrats will be able block passage in the Senate using the filibuster rule, or in the White House using Mr Biden's veto power.

For the next two years, legislative gridlock will be the name of game.
Republicans get the power to investigate
For two years, Democrats have been calling the shots - that's meant an expansive investigation into the 6 January, 2021, attack on the US Capitol, and hearings on subjects including abortion, healthcare and voting rights.
If Republicans take control of congressional committees, the priorities will rapidly shift.
House conservatives have already promised a hearing into Joe Biden's son Hunter's business ties to China. They also want to look into the Biden administration's immigration policies, the US withdrawal from Afghanistan and the origins of the coronavirus pandemic in China.
The Senate Judiciary Committee handles review of presidential nominations to the federal courts. For the past two years, Democrats have set a modern record for the number of new judges seated to lifetime appointments.
If Republicans also take control of the US Senate, expect the process for confirming Mr Biden's nominees to come to a standstill. And if a Supreme Court vacancy opens up, there's a good chance it could remain unfilled until the next presidential election.

Risk of government shutdowns
With Democratic control of Congress, the US had a two-year reprieve from the game of chicken that have led to government shutdowns and near default on the national debt. That's about to end.
Some Republicans, including Congressman Kevin McCarthy who is poised to become House speaker if Republicans take the chamber, are already threatening to force Democrats to agree to sweeping budget cuts.
IMAGE SOURCE,ALEX WONG
Image caption,Congressman Kevin McCarthy is already threatening to force Democrats to agree to sweeping budget cuts
The US has never defaulted on its debt. However partial government shutdowns due to the inability of Congress to approve annual spending legislation have become more common. It happened twice during the Trump administration and once under President Barack Obama.
If Republicans and Democrats can't agree on a basic framework for government spending, another government shutdown by the end of next year seems highly probable.