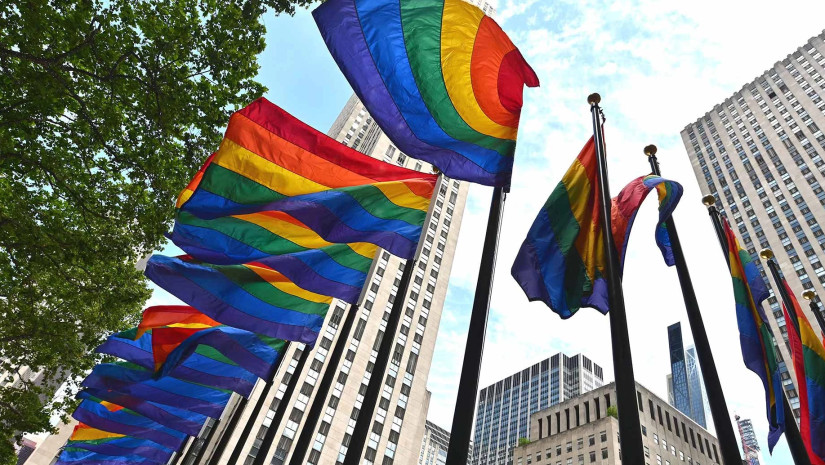 Russia's lower house of parliament has unanimously voted to extend its ban on so-called "gay propaganda".

Under the latest version of the law, any promotion of homosexuality - including in books, films and online - is illegal and carries heavy penalties.
It was nicknamed the "Answer to Blinken" law, after the US Secretary of State Antony Blinken criticised it as a "blow to freedom of expression".
Activists say it is a further attempt to repress Russia's LGBT community.

It was approved by 397 votes to none in the Duma - Russia's lower house - with no abstentions.
The bill still has to pass in the upper house and be signed off by President Vladimir Putin, but this is largely seen as an administrative step.

The original version of the controversial "gay propaganda" law was adopted in 2013, banning "propaganda of non-traditional sexual relations" - depictions of same sex-relationships - among children.
It categorises any positive depictions of same-sex relationships in mass media or advertising under the same umbrella as distributing pornography, the promotion of violence, or stoking racial, ethnic and religious tensions.
Advertising, books and films with positive presentations of LGBT people will be banned - raising concerns from publishers who have warned that it could affect classics of Russian literature.
Any discussions online about LGBT topics can be blocked and the sale of goods with LGBT slogans or symbols would also be prohibited.
Anyone who breaks the law will face a fine of up to 400,000 rubles ($6,600), while companies could have to pay up to 5 million rubles ($82,100).
Foreigners and stateless people risk being imprisoned or expelled from Russia if they do not comply.

Human rights campaigners and LGBT groups have said the extension means that any act or public mention of the LGBT community is being criminalised.
Kseniya Mikhailova of the Russia-based LGBT support group Vykhod (a play on words to mean "coming out") said the original ban nine years ago triggered a wave of attacks on the gay community.
She told Reuters news agency that there would now be a "tsunami" of aggression because the amendment in effect "says the state is not against violence towards LGBT people".
On Wednesday, Anthony Blinken urged Russia to drop the bill "and respect the human rights and dignity of all."

The Speaker of the Duma, Vyacheslav Volodin, who called it the "Answer to Blinken law" in parliament, took a different view.
He declared that the legislation would protect the country from LGBT values, which he called the "darkness" spread by the West.

Vladimir Putin has made anti-gay rhetoric the cornerstone of his political agenda.
In a recent speech, he accused the West of "moving towards open Satanism", citing the promotion of gay and transgender rights in Europe as an example.