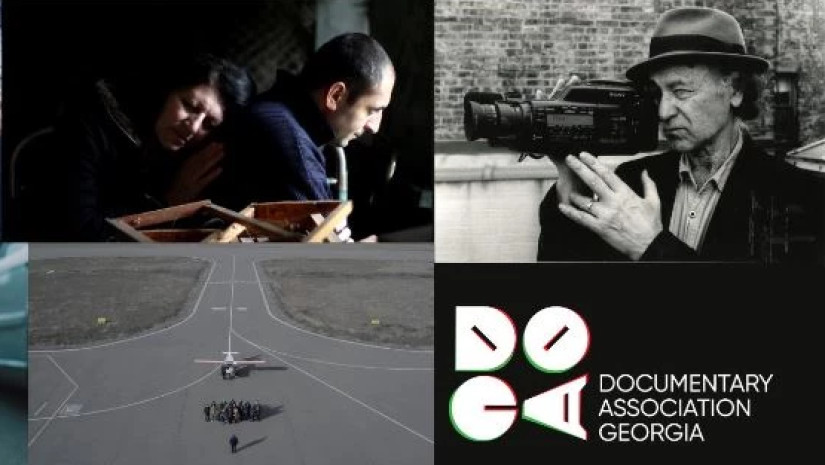 Tickets will be available from Dec 1 in Amirani Cinema and online.
www.doca.ge/activities

talk with the Head of Ukrainian Diplomatic Mission Andryi Kasyanov and Lithuanian Ambassador Andrius Kalindra, moderated by Davit Doborjginidze
On April 2, 2022, Lithuanian filmmaker Mantas Kvedaravičius was arrested and killed by the Russian occupying forces in Donbas. His body and the footage he shot were recovered later. Kvedaravičius provides the world with a colossal and sensitive view of Ukrainians as they live in tragedy and hope as bombs rain down on and around them.


December 6th, 19:00 Amirani 3
𝐅𝐑𝐀𝐆𝐌𝐄𝐍𝐓𝐒 𝐎𝐅 𝐏𝐀𝐑𝐀𝐃𝐈𝐒𝐄
dir: KD Davison
USA 2022 98’
Fragments Of Paradise assembles thousands of hours of Jonas Mekas’ personal footage, films, video diaries and letters to paint an intimate portrait of the life and career of the pioneering filmmaker, poet and critic who was born in Lithuania and moved to New York in the wake of World War II. The interviewees include Amy Taubin, Peter Bogdanovich, John Waters, Martin Scorsese, as well as Jonas’s children Sebastian and Oona Mekas.


December 8th, 16:00 Amirani 3
𝐖𝐇𝐄𝐍 𝐓𝐇𝐄 𝐏𝐄𝐑𝐒𝐈𝐌𝐌𝐎𝐍𝐒 𝐆𝐑𝐄𝐖
dir: Hilal Baydarov
Azerbaijan/Austria 2019 118’
Q&A with the filmmaker
Immobile in a home where the sands of time fall to the rhythm of rural Azerbaijani sounds, a mother waits for her son. When he arrives, their conversations circle around existential questions and news from afar, troubling and cryptic. Unrest cloaks the world outside. Mother and son grow closer, silence melts into words, and life springs between them.
The film was awarded at Visions du Réel and Sarajevo Film Festival


December 10th 16:00 Amirani 2
𝐌𝐔𝐒𝐄𝐔𝐌 𝐎𝐅 𝐓𝐇𝐄 𝐑𝐄𝐕𝐎𝐋𝐔𝐓𝐈𝐎𝐍
dir: Srđan Keča
Serbia/Croatia/Czech Republic 2021 91’
Talk with public defender Nino Lomjaria and lawyer Anano Tsintsabadze, moderated by Chevening alumni Ketevan Vashagashvili
A derelict building envisioned as the Museum of the Revolution now tells a very different story. In the damp, pitch-dark building live the outcasts of a society reshaped by capitalism. The film focuses on a girl who earns a little cash on the street by cleaning car windows with her mother. The girl has a close friendship with an old woman who also lives in the basement. Against the background of a transforming city, the three women find refuge in each other.